A guest asked Dominic if he would record a trick on his phone. Dominic borrowed a bank note, had it signed and then did something special just for them.  The sound isn't great as it was captured live and later sent in to us. Notice the expression of the man as he watches his bank note transform. He can't believe his eyes!

Guests often want to film our magicians so they can share the magic with their friends. We love that, as it helps spread the word about our clients events and creates a buzz long after the party has ended.

Our strolling magicians mix with your guests, moving from group to group so everyone gets to see the magic. The magic secret is to make sure that the focus is on entertainment. It doesn't matter how good a magicians technical skills may be, they have to engage the audience, charm them first, then fool the hell out of them.

At this event, Dominic mixed with the guests during pre-dinner drinks, following through to preform at their tables during the evening.

You can find out more about Dominic Reyes here 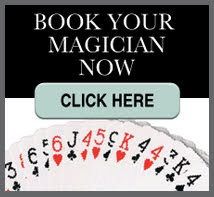